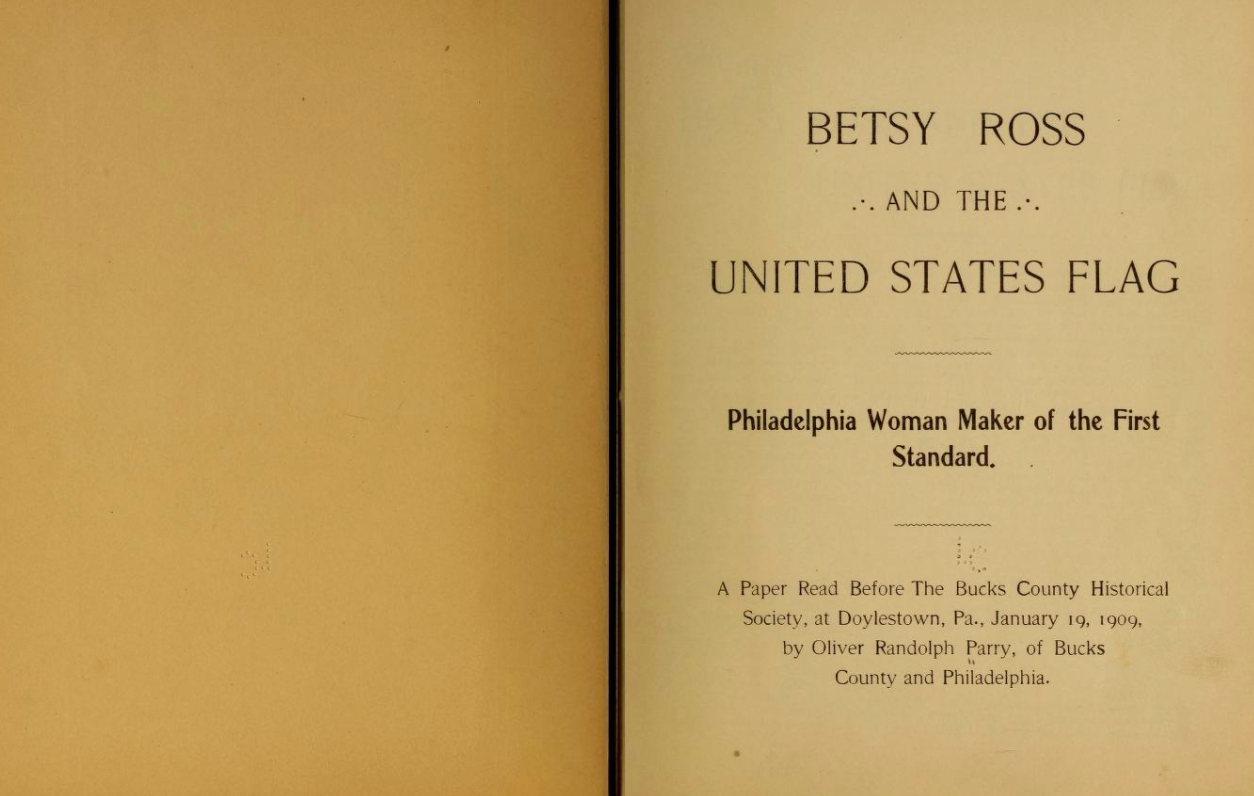 If you ask most Americans who Betsy Ross was, they will tell you she made the first American flag at the time of the American revolutionary war. Most visitors to historic Philadelphia head enthusiastically to her family home at 239 Arch Street, second only to the top tourist destination, Independence Mall, which houses the Liberty Bell and Independence Hall. Tourists see the Betsy Ross House as a symbol of American liberty and a direct link to the birth of the new nation. The challenge is this: Today there is no direct evidence that Betsy Ross herself made the first accepted prototype of the American flag. She may have. Or she may not have. Or she may have been part of a group of women flag makers that were working together. So how did Mrs. Ross come to hold this iconic role almost 250 years after the Declaration of Independence was inked?

My research peeled back the years to uncover what we can confirm as fact and what may be fiction.[Story continued by clicking link below.]

Some 57 years after Abraham Lincoln’s death, this vast monument to him was completed in Washington, D.C., in 1922.

The memorial sits on a 109-acre site and weighs 38,000 tons (source: National Park Service) and is a sweeping 200 feet by 132 feet, towering 192 feet high. Constructed from Colorado yule marble, Tennessee pink marble and Massachusetts granite, the memorial cost more than three million dollars and took almost seven years to make after the cornerstones were laid.

When gazing at the grand Doric colonnades, it’s easy to overlook the history of memorializing Lincoln in this country. As the 16th president of the United States, Lincoln is known as the man who saved the union, and the president that freed the slaves. In Standing Soldiers, Kneeling Slaves (Princeton University Press 1997), University of Pittsburgh professor Kirk Savage takes a close look at how early memorial attempts for Lincoln often had a rocky road from design to completion and erection, with much politicking and cultural change in between. [Story continued by clicking the link below]

Remembering and Teaching Slavery in America

Slavery and Public History: The Tough Stuff of American Memory (University of North Carolina Press, 2006), edited by historians James Oliver Horton and Lois E. Horton, is a collection of essays on the public memory of slavery in the U.S. The book begins with a challenge for public historians: How do we deal with the history of American slavery in a country dedicated to freedom?

The first five essays make for interesting reading. At first I thought my favorite essay was essay #3, when James Horton makes the bold statement that America’s problem with slavery is that the “vast majority of Americans react strongly to the topic, but few know much about it.”  I was fascinated by his argument on page 38 that the original fervor to leave the British Empire was that English taxation and governance made “slaves” of the colonists.

I then, however, read essay #4 by John Michael Vlach, The Last Great Taboo Subject: Exhibiting Slavery at the Library of Congress, and changed my mind. This essay became the most compelling for me, of the first five.

Carried to the wall (University of California Press, 1998) by Kristin Ann Hass is an exploration of how Americans come to terms with the memory of losses experienced by our participation in the Vietnam War. In order to examine this in detail, Hass explores the creation and ensuing response to the Vietnam Veterans Memorial Wall in Washington, D.C., arguing that the memorial changed the way we experience national loss, and how we actively participate in cultural mourning.

The Vietnam Veterans Memorial Wall, which Hass dubs the Wall in her book, was created in 1982 as a memorial to the 58,000 men and women who lost their lives or were missing in the Vietnam conflict. Now a national memorial run by the National Park Service, the Wall is free to visitors and is open 24/7, 365 days a year. [Continued by clicking the link below the image]

Diving into the Korean War

Until this week, I knew almost nothing of the Korean War. I knew the conflict had occurred in the 1950s on the Korean peninsula and that Canada (where I grew up as a Canadian citizen) had played a part in it. That was the extent of my knowledge. Previously I was more interested in older wars – the U.S. Revolutionary war, even very old English wars.

I feel differently now after having read Embattled Memories: Contested Meanings in Korean War Memorials by Suhi Choi (University of Nevada Press, 2014.) I loved this book. It held my rapt attention for all five chapters, including the epilogue. [Continued by clicking the link under the book cover.]

Remembering Pearl Harbor ... Depending on the Decade

This week in history class we read A Date Which Will Live by current University of California (Irvine) Professor Emily S. Rosenberg.

The title, A Date Which Will Live, comes from President Roosevelt’s speech 24 hours after the attack, when he said, “Yesterday, December 7, 1941 a date which will live in infamy, the United States of America was suddenly and deliberately attacked by naval and air forces of the Empire of Japan.”

Musings on History, Travel, and Books

“To fully understand the role of historical exhibition in the United States, we need to explore the medium in its diverse forms, particularly the ways in which visitors take meaning from them. This work is especially important for community, entrepreneurial, and vernacular exhibits, which have been neglected by scholars but not by visitors."  Professor Tammy Gordon, Private History in Public

In 2003, my husband and I journeyed to Peru to hike the Inca trail at Machu Picchu. We completed an extraordinary sunrise summit and were granted a breathtaking reward at the end as we stood amongst the incredible ruins of a once-great Inca city high atop a mountain.

Yet there was another special treat that trip. Hanging out in Lima before flying home, we decided to walk around the city and stumbled into the Museo Padro de Osma, the museum of Padro de Osma. [Pictured above. It's on a fairly average street and you can just walk past it without realizing it's a museum filled with 500 to 300 year old treasures.]

There were two things that struck me about this book. First, that the writing was refreshingly excellent and second, that I had been unaware of the history of urban renewal in the U.S. as it relates/co-exists with the needs of historic preservation.

As Dr. Reichl points out, co-existence was not always the case. Prior to the late 20th century, historic preservation was not taken into consideration as cities sought to modernize and monetize their interiors to reflect a changing society. “Historic preservation became an established part of the field of architecture in the mid-1960s when it was introduced in the curriculum of the architecture program at Columbian University by James Marston Fitch,” writes Reichl. “Fitch and other social theorists argued that retaining physical manifestations of the past was essential to the emotional well-being of individuals and the stability of society.”

My daughter, Holly, in Times Square NYC in January 2020.

Thoughts on Museums, Monuments and National Parks: Towards a New Genealogy of Public History by Denise D. Meringolo

My family lived in Calgary, Alberta when I was a little girl. We moved there when I was seven and left when I was twelve after my dad found new employment in Eastern Canada. Our home in Calgary was about an hour away from the majesty of the Rocky Mountains, and they are indeed majestic. My parents frequently drove my brother and I to the mountains on the weekends for hikes, camping, and ranger programs at the interpretive center in Banff National Park. https://www.pc.gc.ca/en/pn-np/ab/banff

As an adult, I now feel a deep sense of peace and tranquility when I am in a stretch of wilderness, or even simple nature, such as a wooded city trail. My eyes scan the sky and land for wildlife, flowers, trees that shiver with life. I prefer not to listen to music when I’m surrounded by the outdoors, so I can be part of the deeply restorative world around me. In nature time shifts, ebbs, lurches forward, making us everything and nothing all at once. The land silently marks the folly of humanity. Presidents die, wars start and end, borders shift, people wear saddle shoes then sneakers then Crocs made of a foam resin, but still the mountains stand and the oceans heave. [Cont'd by clicking under the image below.]